A Case Study in What Not To Do

In December 2017, I applied for a local economic development job with the local Main Street program and didn't get it. I continued to attend meetings and do volunteer work for them and another local non-profit that often interacted with them.

They hired a man named Wil Russoul. He isn't really as qualified as I am to actually do the work involved.

He stole my ideas, denied me credit, actively interfered with me making connections on the ground to try to establish an income locally (instead of just online) and generally mistreated me. Meanwhile, some local big wigs strung me along for two years with vague promises that I might yet have another shot at the job because people weren't really satisfied with his performance.

In May of this year, I quit all my volunteer work at both organizations. I spent the summer -- during the global pandemic -- ranting on various blogs about how I was mistreated by the local economic development people (most of which has since been redacted).

Part of what has gone on is that I was doing website work for a local organization called Our Aberdeen and they maneuvered to have one of the websites I was developing become the official website for a project Wil Russoul was in charge of because he wasn't really getting anything done on the project.

He also had purchased a bunch of domain names when he was first hired because he is enamored of shiny tech, but he doesn't actually know how to use it. Most of them languished for more than two years as "Coming Soon" pages and it's possible some of them have never been developed. I haven't really paid that much attention.

In September of 2020, he finally got their main website re-done after it spent more than a year as a "Coming Soon" page and I promptly dogged his lame effort on one of my blogs. Over the course of three days, I would criticize something on the site and within hours he would change it in accord with my remarks.

This is beyond the pale for wild coincidence. I'm quite confident that he is cyberstalking me and continuing to steal my ideas without giving me credit, even though I quit all my volunteer work.

It's incredibly abusive behavior and he continues to botch what he steals, just like he did when I was happy to feed him ideas simply because I live here and if the town gets better, I get to live in a better town.

In the absence of indications to the contrary, you should assume good faith. Don't assume people are out to get you.

Obviously, you should take reasonable precautions and make sure people earn your trust before you give them projects that require someone you trust. But if you really think they are out to get you, why are you even working with them?

Also, make sure that people are getting something out of working for your organization or your cause, even if there is no organization. Don't intentionally screw people over, if only out of enlightened self interest because they will eventually get tired of it and stop supporting your work at some point if it is all downside for them.

There are people who just want to see X happen and are happy to support your thing as long as X actually happens. I'm capable of being such a person at times.

I was hoping to make local connections and establish a better income by establishing an income on the ground in addition to what I do on the internet to make money. But even if that didn't happen, I would have been willing to support their program just to see my town get better.

If my town improves, that improves my life, even if it doesn't do much for me directly. Even if my income doesn't go up, my life will be better if crime goes down, businesses thrive so I have more places to shop, etc.

I had planned to make this post about their lousy website, everything that is wrong with it and document the degree to which I'm sure this man is continuing to steal ideas from me and give me no credit while he gets a big salary and I remain dirt poor, in part because of his abusive behavior and the abusive behavior of his organization that nominally does economic development work.

The way this played out is that the longer I worked with the two organizations, the more they loaded me up with unpaid volunteer work because I had the ability to get things done that their paid employee lacks. He continued to draw a relatively big salary, I got diddly and they were bleeding me for my time and expertise while I remained dirt poor, in part because I was working for them for free.

I have decided to skip making this post about documenting their website. I think multiple important people in town are well aware of a lot of these facts and if it goes to court, having a single published post trying to document this won't likely be some kind of critical detail that is the make-or-break for a court case.

I wanted to write this post first because I spent three years doing research and developing a mock-up website for their organization in case I actually got the job, like local big wigs were suggesting might happen, and I have decided I want to edit that info to make it appropriate for a personal website published by an individual and not written as though it is for their organization. I want to publish it to use as an example for this project of how to create a good website to promote your community.

Given his track record of stealing everything of mine and giving me no credit, I fully expect him to use the same tactics when I edit my mock-up into a personal website and publish it. No, I am not content to say "Oh, sure, just steal my three years of research and labor and expertise while I remain poor and you continue to draw a relatively big salary that you don't really deserve."

Should he do that, it may be time to lawyer up and sue both him and the organization he works for and possibly others in town who watched this debacle go down and stood by and did nothing for me while everyone knew I was likely the poorest person in the room at all of these meetings where the stated mission was "local economic development" -- which is supposed to mean helping people like me succeed financially so I can stop being so poor.

When I publish that info on a site called Pedestrian Coast, it is not intended to be "free for use" for the local downtown association run by Aberdeen Revitalization Movement and doing business as Downtown Aberdeen Association at 210 South I Street- Aberdeen, WA 98520.

This entire thing is morally depraved and the exact opposite of what a local citizen should be able to expect when they make a good faith effort to attend meetings at a local economic development organization and participate in good faith in hopes of somehow bettering their own life or at least seeing the town get better.

I will provide this screenshot showing the three new links they added that are similar to what I did on the screenshot of the mockup on this page. My mockup example: 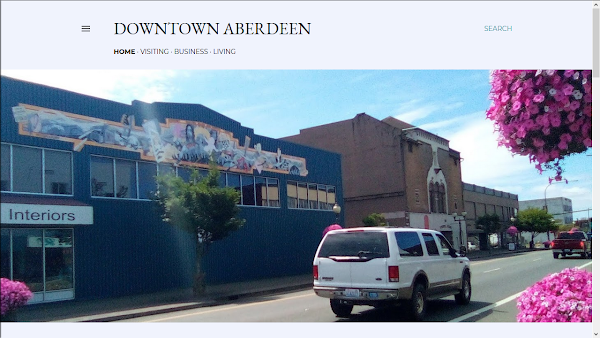 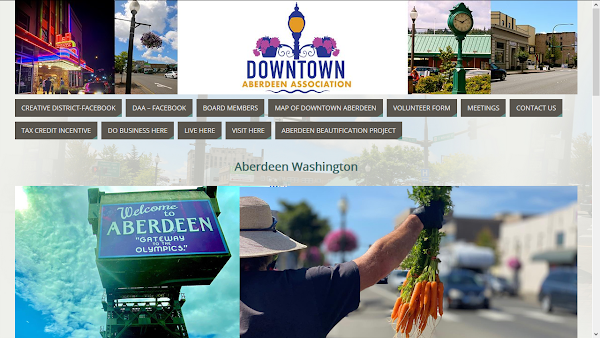 My pages titled Visiting, Business and Living are all pages on the mock-up site with original material. His three links with similar but not idential names are merely links to the Grays Harbor Chamber of Commerce website at GraysHarbor.org: Should they suddently morph into quality content identical to or very similar to mine on my site called Pedestrian Coast, it's stolen content. Mine is original and involved a lot of work, work he doesn't seem to have any idea how to do.

These are old screenshots I did in the course of criticizing the site during the three days where I would criticize it and he would then update it: 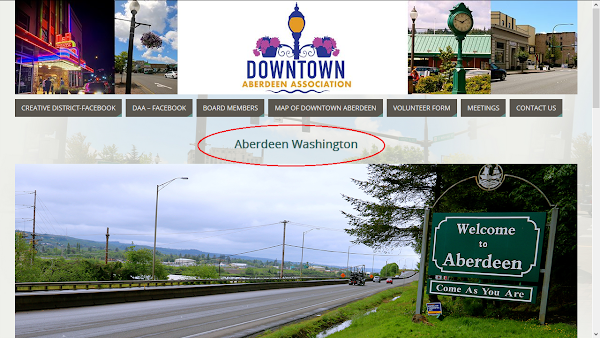 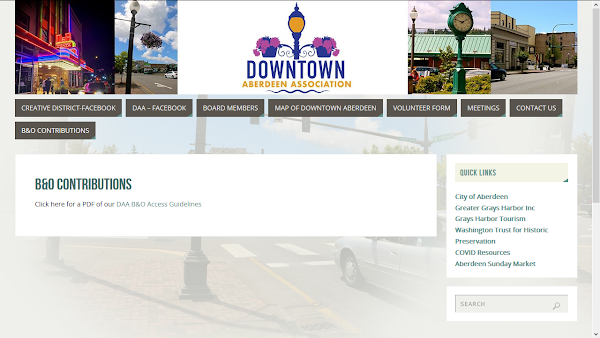 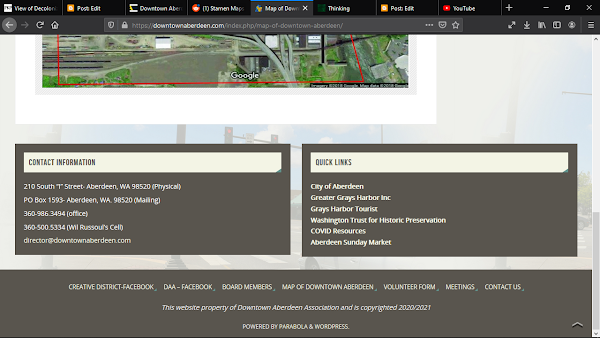 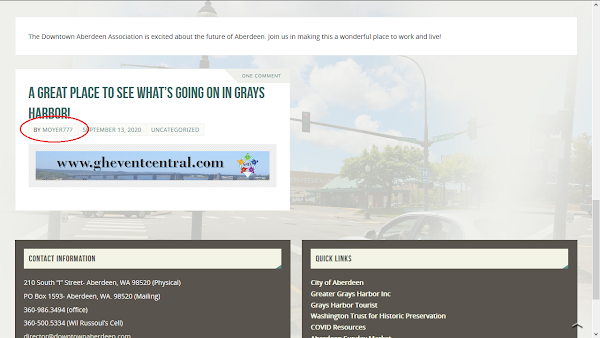 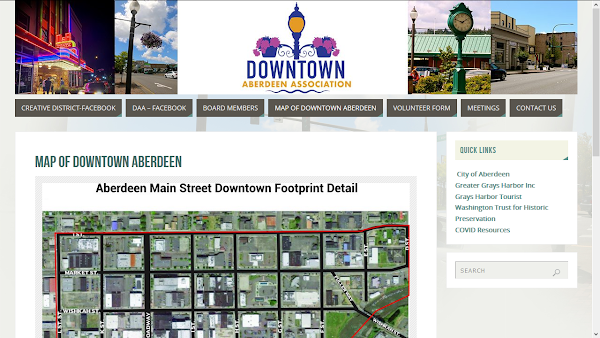 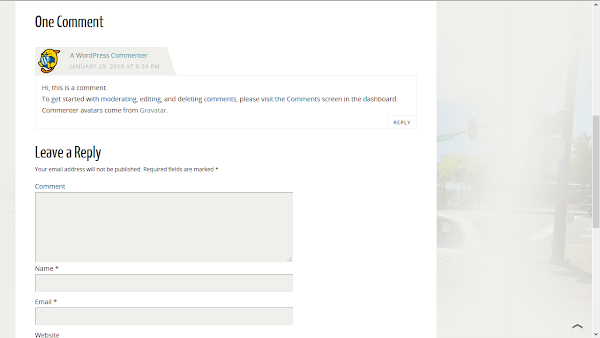 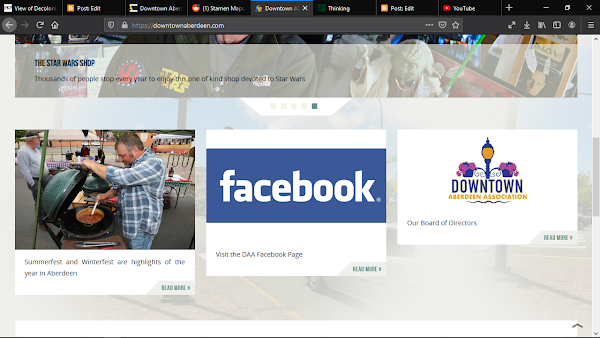