Create an Online Community Space for Your Geographic Community

Working with something you already know will tend to be easier for you and prior experience with a particular technical environment and social media culture can be very valuable. Hopefully you can borrow ideas from this post anyway, wherever you choose to develop your online community space.

I recommend that you take some time to write up a profile of your geographic community and think about your goals for the online space. Design the space to serve those goals.

Be a bit leery of making it a space for "me and my friends." There is nothing wrong with creating a space for you and your friends, but it tends to do a poor job of serving the larger community or having a role in planning and development.

Looking at examples can be very helpful. You can look over the place-based Reddits I currently moderate as examples of online communities with a goal of supporting development.

You should look at the styling, the info in the sidebar, the Welcome messages and so forth. That can give you some ideas for what to do with your space. If you are creating a new community from scratch on Reddit, pay close attention to how you spell it and to capitalization. On Reddit, none of this can be changed after you create the community and you cannot delete the ocmmunity either. (However, you can give it away if you really don't want it.)

Bad eyesight and a tendency towards typoes is how I ended up with r/NorthToAlsaska before also successfully creating r/NorthToAlaska. I've decided to keep it and try to have fun with it. I could also make it private and use it as a "junk drawer" so to speak and maybe I will do that at some point.

I acquired r/aberdeenwa and r/AleutianIslands via r/RedditRequest and I acquired r/homerAK and r/Seward via r/SubredditAdoption. So I didn't personally name them and I'm stuck with some funky capitalization in a couple of those cases.

Once you have your sub set up, you can message the mods of the Global list of location Reddits and ask to be added (assuming you aren't already listed). Their sidebar has code you can copy and paste to add a link to their list to your sidebar as well.

If you really want to attract new members, you should go into Community settings and make sure it points to your location: 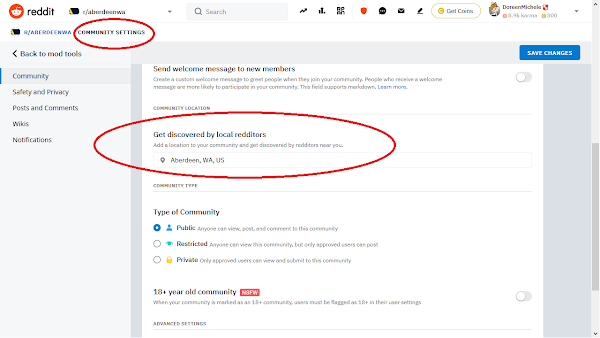 You can also email the mods for related Reddits and ask nicely if they will add you to their sidebar. (Make sure you add them to your sidebar first.)

It's a judgment call as to whom to ask, but don't automatically assume they won't do it just because their sidebar is currently empty. Moderation on Reddit is mostly unpaid volunteers and they may have just not about it or maybe weren't even aware it was an option.

When I took over r/aberdeenwa, I messaged the mod for r/GraysHarbor. At the time, it had no info in the sidebar at all and just had the default blue Reddit color scheme with no icon nor banner.

They added my sub plus a few others to the sidebar and also chose to supply a description in the sidebar. So my request caused them to further develop their sub. 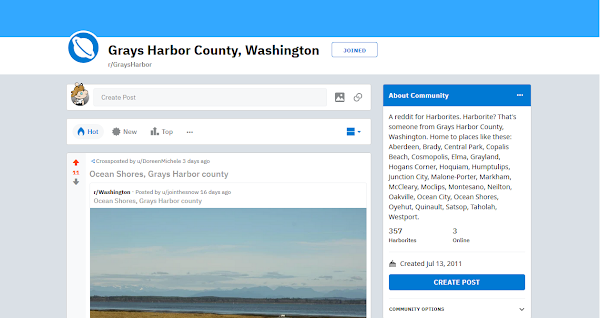 However, not all of my requests have been honored. I've messaged some subs and asked to be added and never got a reply and never was added.

Also, keep in mind that even if they do as you ask, it may take a while for them to get back to you. Unpaid moderators tend to their duties as they can fit them into their lives and this can cause slow turn around times.

I recently acquired abandoned Reddits for three Alaskan communities: r/Seward, r/homerAK and r/AleutianIslands. I then added the same icon to all three, an edited version of the Alaskan flag (edited to make it fit the size/shape requirement for the icon space on Reddit).

I think until just a few days ago, r/alaska was the default blue color scheme with very little in the way of editing or styling (it did already state up top "Subscribed to by 5% of Alaska's Total Population!"). I logged into it yesterday and was weirded out to see they have apparently outright stolen my icon to use on their sub and also updated their color scheme and added a gorgeous photo for the banner.

I have mixed feelings about that. On the one hand, I have no copyrights to the flag of Alaska and they are as free as I am to use the flag (assuming the state of Alaska doesn't care to sue either of us).

On the other hand, I did spend time and effort editing it to fit the quirky format for the Reddit icon space and I wasn't asked and I don't seem to be getting credit in any way, shape or form. I think credit in the sidebar would be appropriate: "Icon created by Doreen Traylor and found via r/Seward" or something like that.

If you have a sub for a place in Alaska, I am okay with you re-using my Alaskan flag icon. Please credit me in the sidebar. (No, I am not okay with other Reddit icons of mine being similary "borrowed." Most of my icons on Reddit are original work drawn by me.)

There's a long history of people in forums using my ideas to improve their thing, not giving me credit and mistreating me. In several cases, I left the forum over this (or was ultimately banned for -- in my opinion -- pushing back against their abusive garbage).

In at least some of those cases their forum became a shadow of its former self following my departure. My inference is that I was playing a rather significant role in making the forum work well and no one really recognized or appreciated this while I was still active and it bit them in the butt after I left.

They probably don't really know why it "died" either. They were probably such jerks to me because they just don't have much in the way of social savvy and may have never made the connection between "She left and then it died." which may be just as well because people who are jerks tend to go "It's her fault it died!" when they do have such realizations instead of "Oh. We are idiots and should have treated her better. Wow."

Eclogiselle exists in part to provide free technical resources to people doing community development work. I think what they did on r/alaska looks really good and I even decided to borrow some inspiration from their design decisions to update the color schemes for my four Alaskan subreddits (the fourth being r/NorthToAlaska).

My subs had been somewhat thrown together. They were still pretty new and still sort of half-baked in terms of design decisions and color scheme. I'm happier with them now and hopefully people will feel that with five Alaskan subs with related design work, it sort of unofficially "brands" Alaskan subs as all related to each other.

Hopefully, this will not lead ot animosity between me and them. The fact that they were apparently inspired by what I had done with r/Seward et al is what inspired me to write this post because obviously people are already borrowing ideas from what I am doing and significantly upping their game because of it for no money and just a little time and effort.

Last, if you do setup a Reddit as your online community space, you should be aware that old.reddit.com and reddit.com have separate sidebar interfaces. You have to go into old.reddit.com and update that separately if you want all your visitors to have access to the same information in the sidebar.

If you are using something of mine that I have published as "free for your use," I would love to hear back and learn that I am doing some good, how it is helping you, etc. That would help me further develop this site.