I started a website a few years ago called Project: SRO. It languished for a time but has finally recently gelled.

It currently has a few entries related to a Style Guide. I expect to also write about the history of housing in the US, laws, policies, rules, regulations, zoning and financing mechanisms.

To a large degree, what gets built is what the world makes it easy to pay for and get official permission to create. Thanks to events following World War II that resulted in the birth of the suburbs, we have a decades-long history of entrenched rules, regulations and financing mechanisms that all skew heavily towards supporting the creation of single family detached housing in the suburbs.

This actively throws up obstacles to creating anything else. This fact is further exacerbated by the fact that for the past roughly seven decades, the suburban family house has been the image of good residential development in the minds of most Americans.

Over time, the result has been we have grown suburban family homes on steroids. Suburban homes that were once 1200 square feet modest family homes for a family of four or five have become obscene lifestyles of the rich and shameless McMansions with twice as much square footage and fewer occupants.

In the decades since the US turned its attention to creating the means to rapidly create suburban housing, our demographics have changed. We now have a lot more households with one to three people and a lot fewer with four or more people, yet we build these upper class homes designed for some ideal wealthy nuclear family with a breadwinner father, homemaker mother and 2.5 kids.

We have also torn down about a million Single Room Occupancy units. That gets abbreviated SRO and is the source of the title of the project.

SROs used to be standard market-rate housing readily available to single young people, retirees, childless couples and the like. We now think of SROs as "homes for the homeless" rather than a decent small space for a small household without much money.

Project: SRO isn't just about SROs. It's more like a variation of New Urbanism grounded by the idea that bringing back the SRO -- or something akin to it that is suitable for households with one to three members -- is an essential detail in our efforts to create walkable mixed-use neighborhoods and sufficient amounts of affordable housing in the US.

New Urbanism is a planning and development approach based on the principles of how cities and towns had been built for the last several centuries: walkable blocks and streets, housing and shopping in close proximity, and accessible public spaces. In other words: New Urbanism focuses on human-scaled urban design.

There are lots of New Urbanism resources out there to draw upon. However, it has not successfully displaced conventional suburban development in the US, so my feeling is that it must be falling short in some areas.

From what I gather, one of those areas is financing new projects. That's an area I hope to address with Project: SRO. 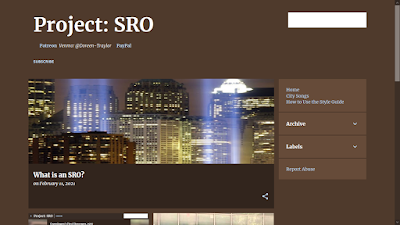